The long Pelion trail! The time has come to share with you this big and beautiful walking trail of Pelion.

From April to October

The inspiration and idea of the long Pelion trail came from Nikolaos Maggitsis, the first Greek to have climbed all Seven Summits and not only. The long Pelion trail has created its own identity through all the intense work that has been done for the past 2 years and this year (2020), the trail is ready for you to explore it and get to know it.

Eight days of hiking in Pelion, considered one of the most beautiful mountains in Greece. Mount Pelion is at the southeastern part of Thessaly in northern Greece, forming a hook-like peninsula between the Pagasetic Gulf and the Aegean Sea. Its highest summit, Pourianos Stavros, is 1,624 meters.

The mountain is thickly forested, with both deciduous and perennial forests, mainly of beech, oak, maple and chestnut trees, with olive, apple, pear trees and plane tree groves surrounding places with water. Pelion is an amply watered mountain with an abundance of springs, gorges, streams and rivulets. Many streams are routed in carved-stone artificial beds to bring water to the villages and their thriving orchards.

Enjoy the beauty of this land, hiking the trails and stone paths that give access to springs, coves and numerous beaches, sandy or pebbly, set among lusciously green slopes. Get to know the history, the Greek mythology, the people and these unique stone paths. Rich environment with lush greenery, mountains, valleys and interesting biodiversity awaits visitors. You will also come across farms, monasteries, old stone buildings, with the traditional Pelian architecture and construction, made out of expertly carved local grey, blue or green slate and red clay, country churches and chapels along the way.

The trail starts from the seaside of the Northeast point of Pelion, Kamari, rises through the mountain peaks and ends at the Southeast point, Platanias. The unique beauty of the southern part consists of vegetation from a lower altitude, were most of the hike takes place among the coolness of shade.

It’s often said that the human body is best designed to handle walking for days on end. Long-distance hikers tell of gaining their ‘hikers’ legs’ after weeks on the trail. So, what better way to get yours than to try out some new routes out there? Long Pelion Trail is one of them!!

Your guide meets you at Volos port and after two hours driving, we arrive in Kamari village, the northeast village of Pelion Peninsula. From here, we start our trail to Veneto through Keramidi village, where you will experience quite a large section of kalderimi, a cobblestone-paved road built for hoofed traffic. The paths are mostly through forest at an altitude of approximately 150 – 250 meters, ending finally in Veneto. Overnight stay in a hotel in Veneto. 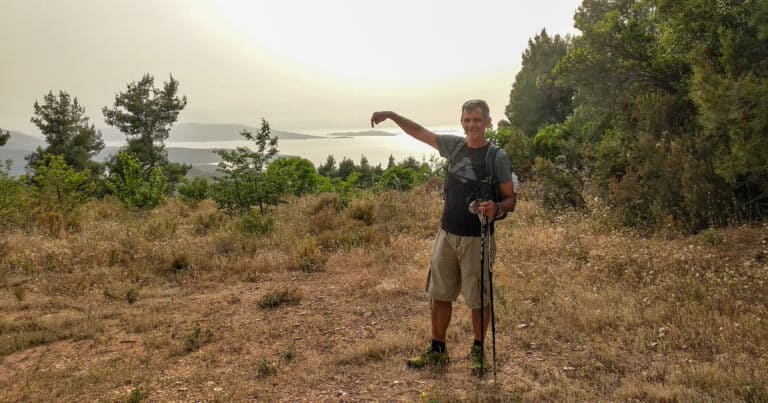 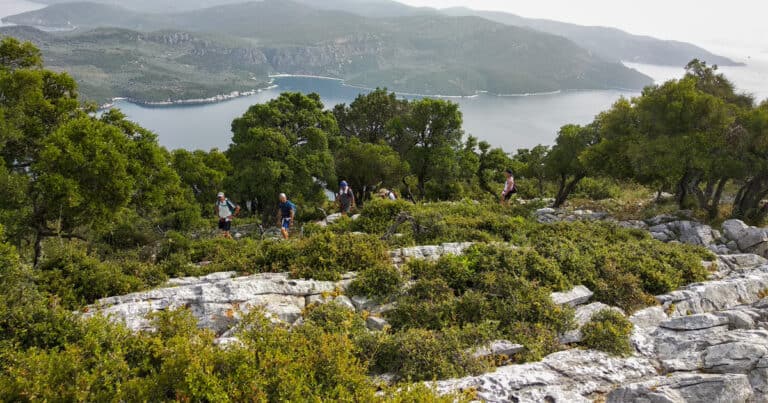 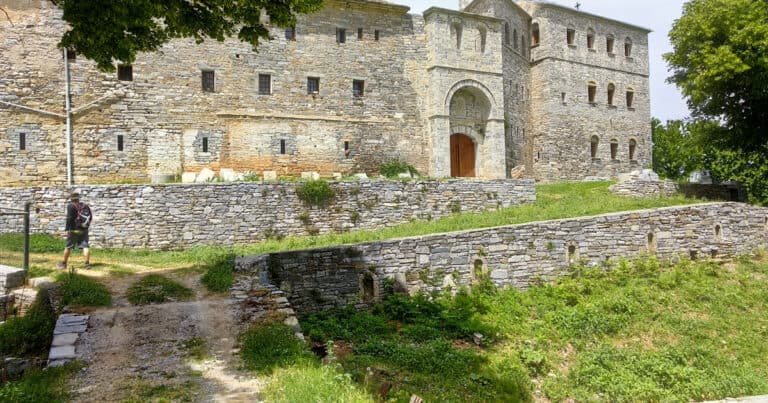 We wake up with the sunrise and after our breakfast, we are ready for our longest hike. On our way, we pass from the monasteries of Flamouri and Sourvia and over the stone bridge of Leschiani. Vegetation is varied: kermes oak, maquis, oak, chestnut, beech and holm oak forest. The best part of the walk is undoubtedly, the beautiful beech forest, between Sourvia and Flamouri monasteries. We end our trail heading to Makrinitsa village (“the Balcony of Pelion”), where the orange – purple sunset will end our day 2. Accompanied by the amazing view of Pagasitc gulf, which lays in front of the city of Volos. Overnight stay in a hostel in Makrinitsa.

Today we will follow the path, where the Centaurs took according to Greek mythology. Centaurs in Greek mythology, were half men half horses. After a short part on the main road to Portaria, the path will lead us to the village of Chania, which is the highest village of Pelion peninsula. Here we will see some traditional tavernas and hotels hidden by beech trees. Overnight stay in a hotel at Chania. 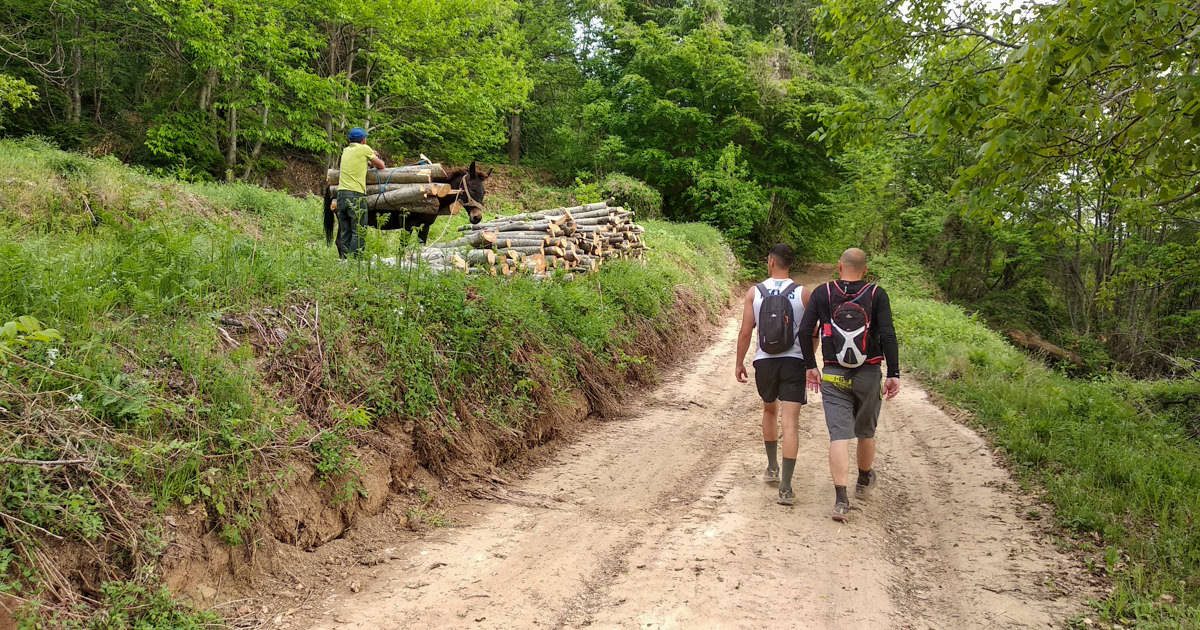 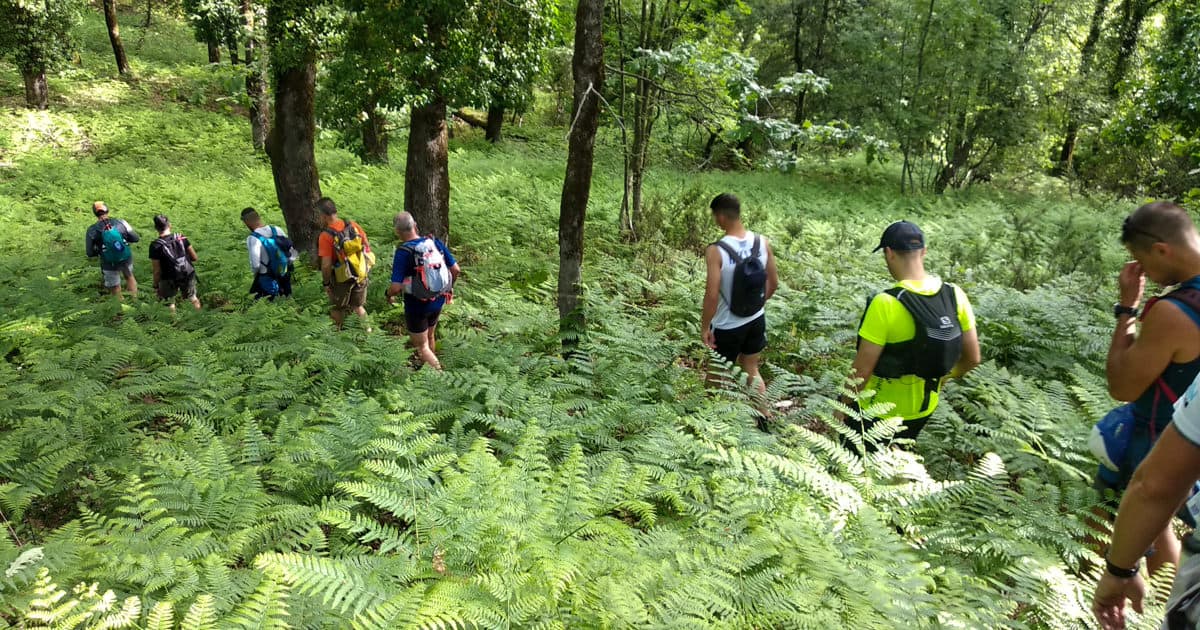 We wake up and enjoy our breakfast at 1220 m with the cold and fresh breeze of the mountain. We start on the main asphalt road to the ski center and follow the slopes. We reach the path to Mouresi. Our route takes place on fabulous path in beech forest, where the last part is on a path in chestnut forest until Mouresi village.

From here we walk down on cobbled stone path (kalderimi) until we reach our destination of Damouchari. Overnight stay in a hotel at the small port of Damouchari.

On today’s hike we cross Mount Pelion from the East to West side, from the Aegean Sea to the Pagasetic gulf. We start walking for about 5 minutes before we start to ascend one of the most beautiful old stone paths in Greece.

From the trail heading to Tsangarada village we will hear stories from the oldest Plane Tree, 12 centuries old – we have a break in one of the three squares of the village.

From the third square of Agios Taxiarxhes we will take the kalderimi (stone paved path) and pass over the riverbed of Milopotamos.

We then head to Ksourichti via forest road through Chestnut Trees. We will continue our hike to the picturesque village of Milies and visit the famous train station, the old library and the church with the amazing paintings, both located in the square of the village. Overnight stay at a traditional hotel in Milies.

Having our breakfast in the quite village of Milies we start our day heading to Abovos beach, Afissos through the ravine of Chalorema, where we will be crossing several streams on our way.

Passing through Afetes village, we should have in mind that the village in question has always been called Niaou, a Slavic name meaning” pen, corral”, until in 1955 the authorities decided to rename it as Afetes. We will have a short break, enjoy a Greek coffee in the square and then take the path that ends to the beach of the Afissos village. Overnight stay at a hotel in Afissos.

From the trail heading to Tsangarada village we will hear stories from the oldest Plane Tree, 12 centuries old – we have a break in one of the three squares of the village.

From the third square of Agios Taxiarxhes we will take the kalderimi (stone paved path) and pass over the riverbed of Milopotamos.

We then head to Ksourichti via forest road through Chestnut Trees. We will continue our hike to the picturesque village of Milies and visit the famous train station, the old library and the church with the amazing paintings, both located in the square of the village. Overnight stay at a traditional hotel in Milies.

We will be taking our breakfast with the sea breeze. Then we start our day by taking the main road to Lefokastro, where after 45 min we meet an old spring water drinking fountain, built in 1777 according to the inscription before our first ascend. After crossing the beautiful stone arched bridge of Rodia, and the small stream of Pnevmatikos, the first houses of Argalasti are visible.

Having our break in Argalasti square under the shade of Plane Tree, we get ready for the last part of the trail to Lafkos, a hike through olive tree fields and the spring of Chatzi.

We reach the village of Lafkos, enjoy the beautiful sunset that will give us the peacefulness and energy from this such beautiful place. Overnight stay at a hotel in Lafkos.

Last day today of the long Pelion trail and we are not in a hurry. Walking through the graveyard out of the village of Lafkos , we visit the chapel of Ai. Giannis, short stop to enjoy the beauty and peace of this place.

Reaching the riverbed (the stream is called Koumani rema (Koumanorema) landscape changes in many ways. The path ends to the wide bed of a stream (Chalorema). Following the stream, we soon reach the picturesque tourist beach of Platanias.

The Long Pelion Trail comes to an end, where a swim in the crystal waters is the only way to celebrate this achievement. Overnight stay at a hotel in Platanias.

Hotels in the cities, village pensions or youth hostels throughout the trip (all with private facilities). The trip prices are based on double occupancy.

Every morning we have breakfast in the hotels and dinner at local taverns. (Vegetarians are welcome on the trips, too).